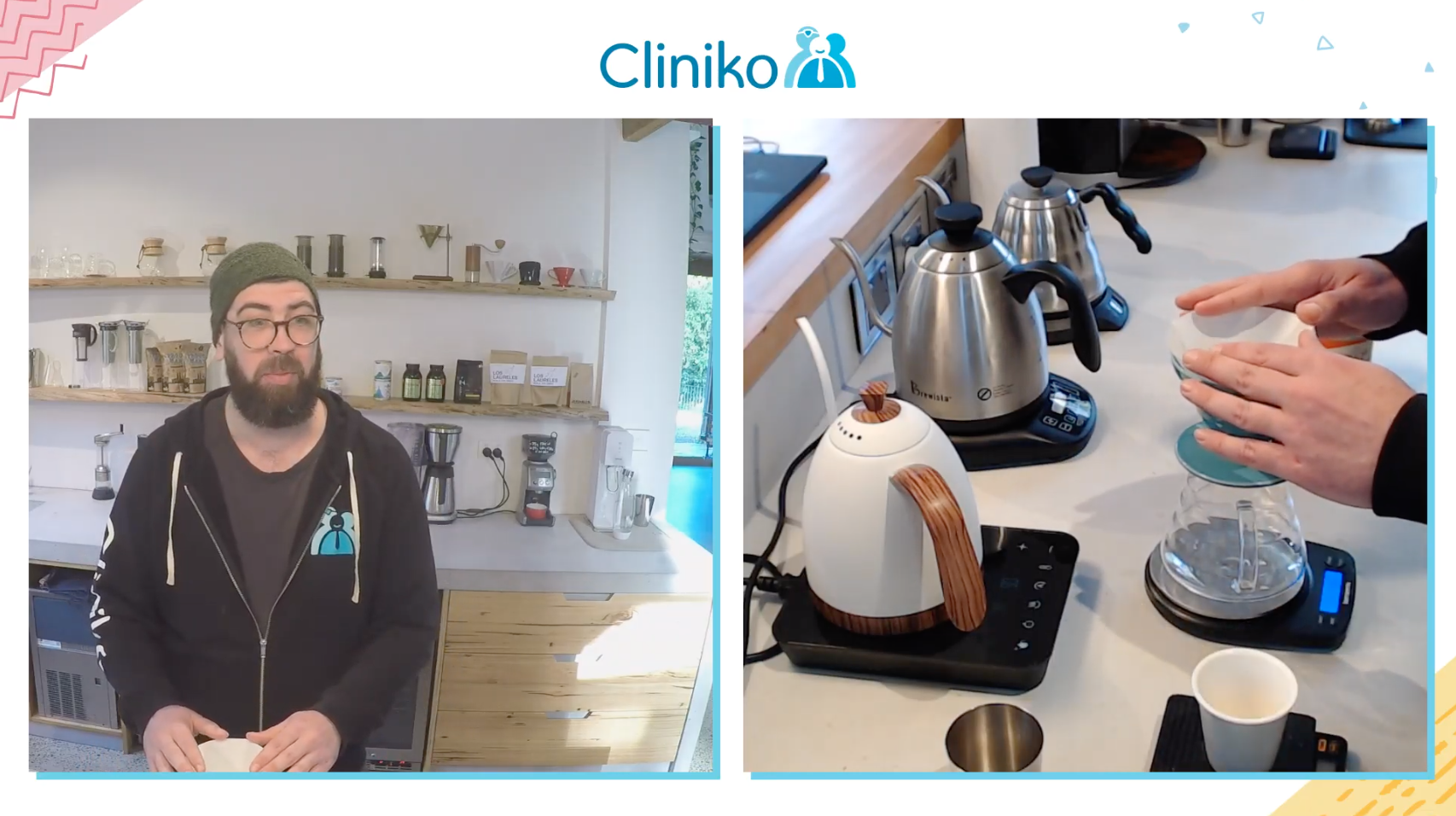 The very first live stream of Cliniko & Coffee was a hit! Joel showed everyone how to make a V60 pour over while sharing some useful coffee-related tips and discussing all things Cliniko, including some intriguing questions from the live viewers. From the best type of coffee filters to whether or not Cliniko will support multiple time zones (hint: it will), it's all covered in the recording.

You can watch that recording right here:

We received quite a few questions about Cliniko features and what sorts of developments are on the horizon, but there were a good handful of coffee-related queries, too. We’ll share a few key moments below—and you can watch the recording of the live stream for the rest! It may spark some new ideas on how to get the most out of Cliniko (and your coffee beans).

Is there going to be support for patients in multiple time zones?

This is particularly relevant with telehealth. Right now, Cliniko doesn’t have support for time zones—but it’s something that we’re working on. It’s a pretty huge undertaking because time zones are ingrained in basically everything in Cliniko, but the end goal is that when a patient books online, they’ll see the appointment in their time zone, but you’ll see that same appointment in your time zone in your Cliniko account.

Can you record an audio file directly into Cliniko?

Not into Cliniko directly, but you can record it elsewhere (such as using an existing tool on your computer or phone) and upload it as a file attachment! On a similar note, some were wondering if they could dictate notes (voice to text) directly into Cliniko. Cliniko itself doesn’t have this tool, but Joel mentioned that if you have an iPhone, you can use Siri to record yourself talking and convert it to text—and Android would probably have a similar feature!

Are patient forms going to get a redesign?

Can there be a “search for everything” function in Cliniko (like Apple’s Spotlight feature)?

Joel loves this idea and definitely wants to get it into Cliniko!

Joel started the session by making his speciality—a V60 pour over. He has a very specific recipe that he follows for this! Firstly, he recommends using the boxed version of the paper filters (if you do a search for “Hario V60 boxed filters”, you should be able to find these!). When it comes to actually making the coffee, his measurements are 24 grams of coffee beans (measure before grinding) and 400 milliliters of water, heated to 90 degrees Celsius.

When it comes to how long the coffee beans are usable, Joel doesn’t look at the expiration date. Instead, he bases his “use by” date on the day the beans were roasted. They’re going to be ready when it’s been five days since the roasting date, and then they’ll be usable for approximately two to three weeks after that. (Joel thinks that they’re usually best within the first two weeks!)

When asked about the merits of V60 over Aeropress, Joel didn’t want to play favourites—but he does find the end result of V60 pour over to be a bit cleaner. While the Aeropress is easier to use and the V60 is gravity-fed (this makes things a little trickier), ultimately, you have more control over a V60. This can make (or break) the final result, but if you’re smart about your measurements and your pour, the final product will be ultra delicious!

And finally, the most important question—how was Joel’s coffee? Well, at first, “not good” (it was kind of bitter)—but it got better as it cooled.

Check out a behind-the-scenes view of Joel's setup for "Cliniko & Coffee" below: