Simone Muscat never intended to create a business around her hobby. For many years, she worked as a physiotherapist in Melbourne while exercising at her local pole fitness studio in her spare time – and kept the two worlds separate. She loved her job and used pole fitness as a mental escape to help unwind from seeing patients: “Physio is very all-consuming. As a healthcare professional working in sports, it can be hard to have boundaries between your profession and your life. So, when I went into pole, I thought, this is my place. This is just for me.” But this couldn’t be further from what happened!

Despite her original intentions, Simone now works full-time as The Pole Physio – the business she founded – treating a range of pole dancers, aerialists, and circus artists. She has four other physios on her team helping produce online educational content and is extremely in-demand with patients as a specialist in the sport.

So how did The Pole Physio come about so unexpectedly?

Setting up The Pole Physio

Simone’s dream had always been to work in AFL (the Australian Football League) – which she did. She spent some time with the Carlton Football Club men’s team, followed by a stint in the women’s program, as well as working extensively with professional hockey. At the same time, she added a double master’s degree from La Trobe University (in Sports Physiotherapy and Musculoskeletal Physiotherapy) to her qualifications and spent a decade working in physio clinics around Melbourne. Starting up The Pole Physio was an unexpected career turn!

It all began when Simone noticed that there was a big gap in the knowledge of many healthcare providers when it came to pole fitness. Although the Global Association of International Sports Federation officially recognised pole as a sport in 2020, treating pole injuries requires specialised knowledge. Without knowing much about the mechanics of the sport, practitioners were often unable to provide effective care to their pole patients.

In response, Simone decided to write some educational blog posts about movement and anatomy that pole students might find useful, as well as some videos with exercises to do at home as lockdowns began in early 2020. “My idea for The Pole Physio was never to treat patients,” she says. “It was to give back to the pole community – to inspire and educate through social media forms.” Simone’s online content was extremely popular and she found an increasing number of pole students and instructors asking her if they could see her professionally for help with their injuries – and soon enough she was juggling a rapidly growing side business focused on pole athletes, while also working across two physio clinics. Hectic! 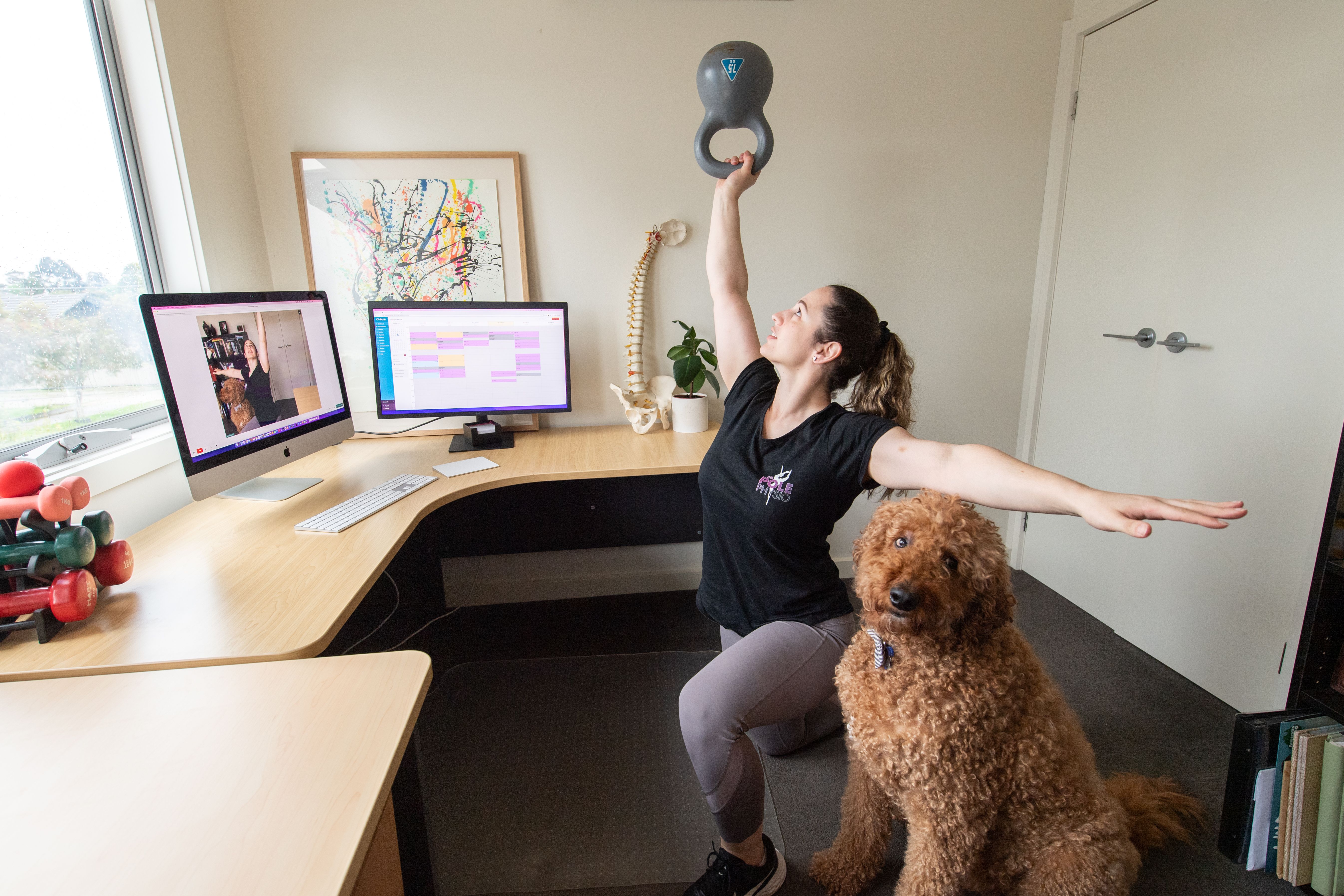 The Pole Physio really took off during the pandemic – Simone found herself overwhelmed with pole patients who were looking, not just for physical treatment, but also for support. “Part of why The Pole Physio was so important to me was because it helped people stay active in a time when they couldn't,” she says. “For a lot of my patients, I think The Pole Physio became a kind of mental health hotline – I was that touch-in person that they would see, whether it was weekly, fortnightly, monthly.” A regular physio appointment became a point of continuity for many people – an anchor when life felt very unstable.

And Simone found herself growing as a practitioner and adapting. Due to Melbourne’s restrictions, Simone began to practise exclusively online – which further honed her physio skills: “I always knew the effect stress and anxiety could play on people, but I don't think I'd realised just how much our autonomic system controls how our body responds. COVID really helped to hone my clinical reasoning skills. I previously treated all injuries with a biopsychosocial approach, but I’ve become even further aware of the systemic and psychosocial drivers of injuries over the past few years.”

Demanding and exhausting as running the business can be, Simone loves what she does more than ever and gets to make a direct impact on a sport she’s passionate about. As she says, “you can't get into physio and not want to help people – that’s the most rewarding thing about my job.”

Advice to other practitioners on turning a passion into a profit

Simone has found a way to bring her physio skills to something she genuinely loves. If you have a burning passion for a particular sport or niche, how can you create a practice that caters to that community? Having been through this process, Simone has a few tips for anyone who’s considering setting up a business around their hobby.

One thing to ask yourself is whether your hobby is something you genuinely want to focus on full-time or not. The Pole Physio started off as a side business while Simone worked at other clinics in Melbourne. This wasn’t simply because she was waiting for the new practice to grow – she was trying to figure out what she wanted from her professional life and deciding to pursue The Pole Physio as her main practice took some soul-searching.

The answer eventually revealed itself to Simone: “Pole Physio isn’t just a hobby,” she says. “It's a passion.” But this won’t necessarily be true for everyone. Would you still love your niche if you were immersed in it day in, day out? For some practitioners, a business focused on a hobby might be best kept as a side hustle – as something to mix up your week, keep you engaged, and provide some fun – rather than becoming your main point of focus.

Simone gets lots of messages from students or young physios just starting out, asking for advice on how to branch into pole or circus physio. She always advises caution: “I say to them, ‘don’t do it yet. You're going to do yourself and the community a disservice, because you're just not going to have enough general knowledge.’ Pole is such a specialised area, I always tell people to go and get a wider base of sports knowledge first. Work with all genders, and types of bodies, from paediatric to the everyday worker, through to the geriatric population. Find as much diversity as possible and immerse yourself in it.”

But this is equally true of any niche sport. If you want to do something specialised, a solid foundation is going to make a world of difference to both your ability and your confidence!

“Have a plan and get some systems in place. Look for things that will grow with your business as opposed to things that just suit you for now,” Simone suggests. “If I’m looking at an app that’s $400 versus one that’s $100, I’ll also consider which one allows me the potential for growth. I'm happy to spend an extra $300 per month if it’s going to grow with me as the business expands.”

Although her patient numbers took off immediately, Simone admits that the administrative side of her business took a bit longer to come together. “I went in and did everything that you shouldn't do from a business perspective,” she laughs. “There was no business plan or anything. The reason I could do it was because I basically had no overheads at the time. All I had was an Instagram page and clinical notes in Microsoft Word!”

But as her patient base just kept increasing, Simone found it difficult to keep on top of the never-ending admin: “The Pole Physio grew exponentially and I didn't expect it to. I would sit up on a Sunday night manually creating everyone's invoices and receipts, which I did for about seven months – and it was exhausting.” We have no doubt! Constantly playing catch-up with your paperwork is incredibly draining and stressful. 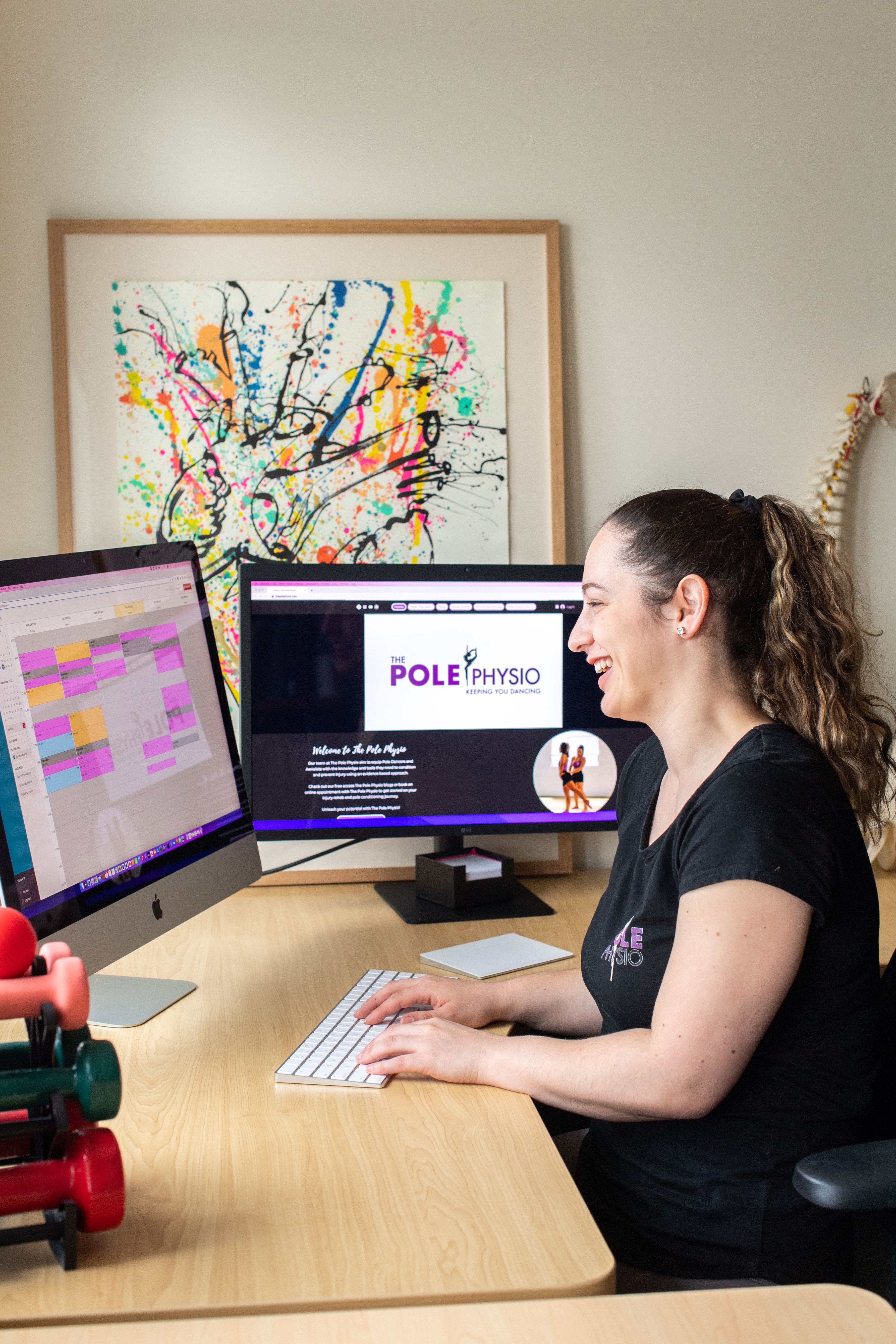 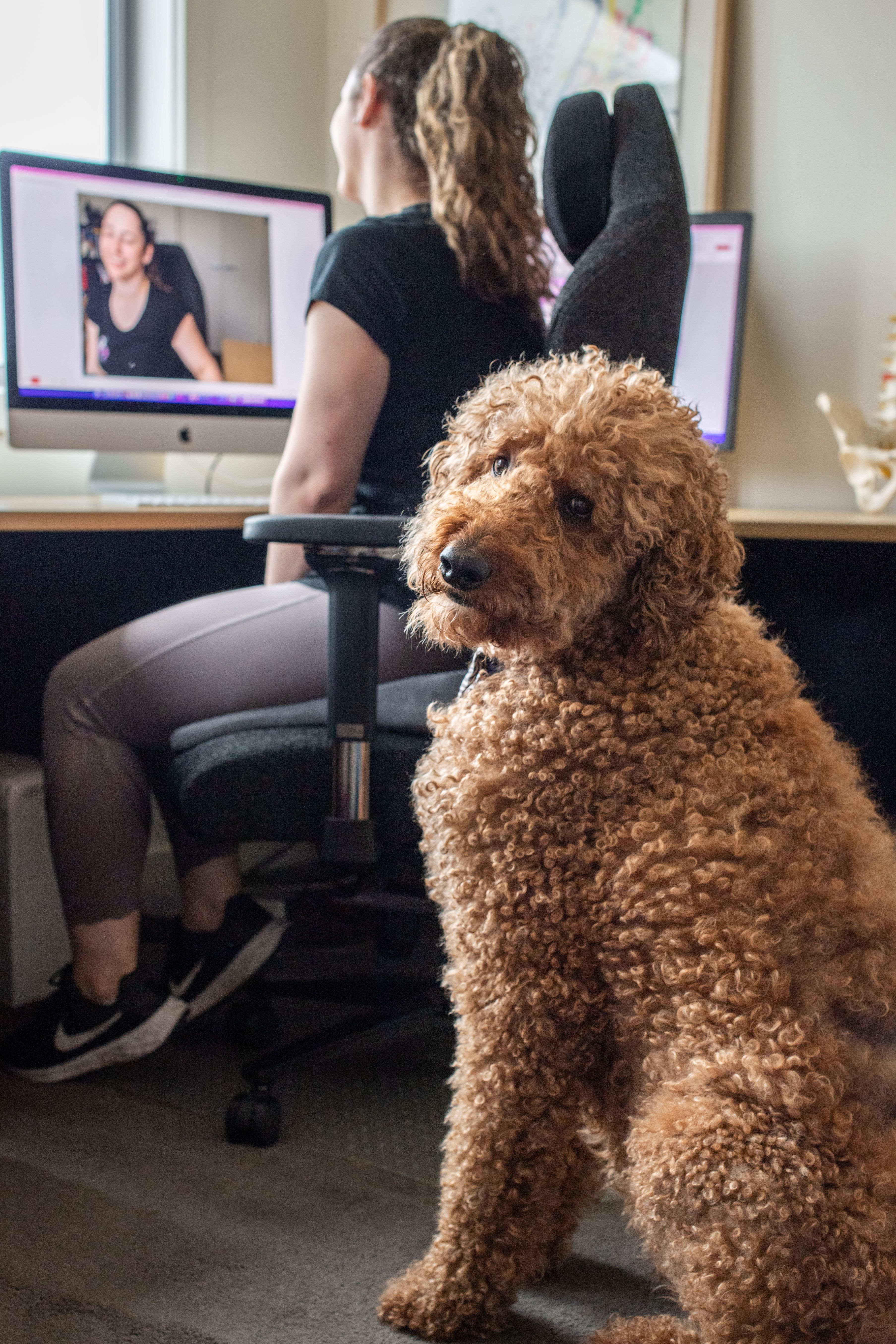 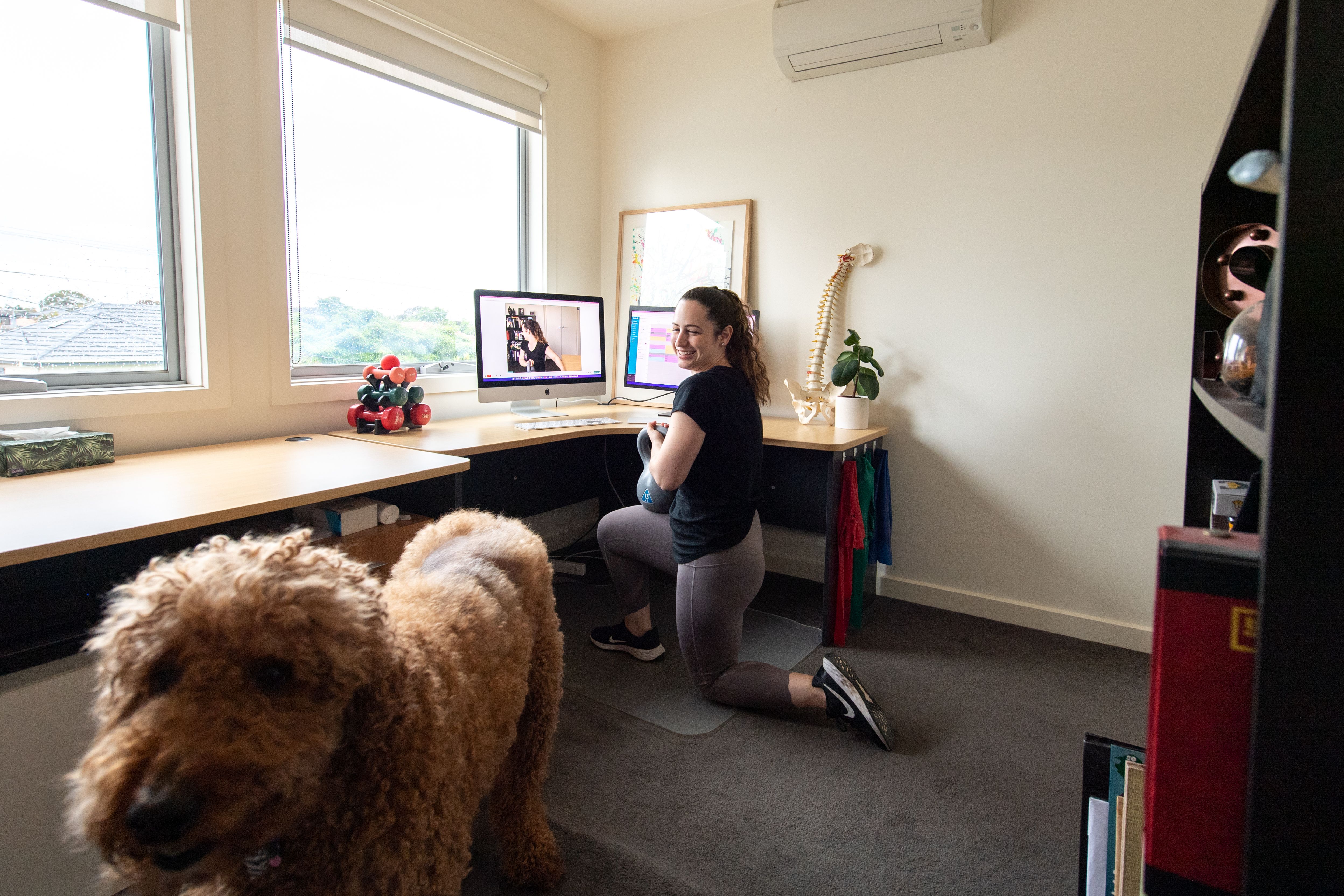 While she considered using free practice management software to keep her expenses as low as possible, she ultimately decided on Cliniko for its useability: “I thought, I don't care if I'm paying this much per year for Cliniko – right now, I need something that makes things simple and doesn't take ages to set up. And aesthetically, it was just so much easier to use than every other bit of software out there”

When she had Cliniko in place, Simone felt an immediate sense of pressure being lifted: “As soon as I implemented Cliniko and got all my patients into the system, it was a huge relief.”

There are a couple of things about Cliniko that Simone finds particularly useful to help run her physio business:

Patients being able to book their own appointments made life much less stressful for Simone – it means she doesn’t have to spend time scheduling. “Patients sometimes like to email me to book, and it's easy to point them back to my website,” she notes. Anyone who has already booked can also use the automated confirmation email they received to cancel or reschedule. “It just takes a whole bunch of stress off me. Having bookings integrated into my website is hands down the best thing about Cliniko.”

With patients based all around the world (including Australia, New Zealand, Brazil, Canada, Turkey, Saudi Arabia, Oman, Japan, Hong Kong, Thailand, the Philippines, and Vietnam), Simone needed her appointments to be accessible across time zones. “The time zone tracker happened around the time that I signed up to Cliniko and was big for me,” she shares. “It made things a lot easier because I'm trying to deal with a global patient base. When patients ask about their appointment times, I tell them, ‘just check your emails, your email is correct!’ I don't have to worry about human error.”

Does Simone have any reservations about Cliniko? “For me, the only downside is price,” she says. “But, to be fair, having this software is like having a practice manager and you’d pay an employee to do that.”

We’re thrilled that Simone has found Cliniko useful. We’re super grateful to her for taking the time to chat with us and for sharing her inspiring story. If you’ve got something that you love to do, hopefully this gives you food for thought as to whether there’s an opportunity for you to make your hobby part of your clinical practice. 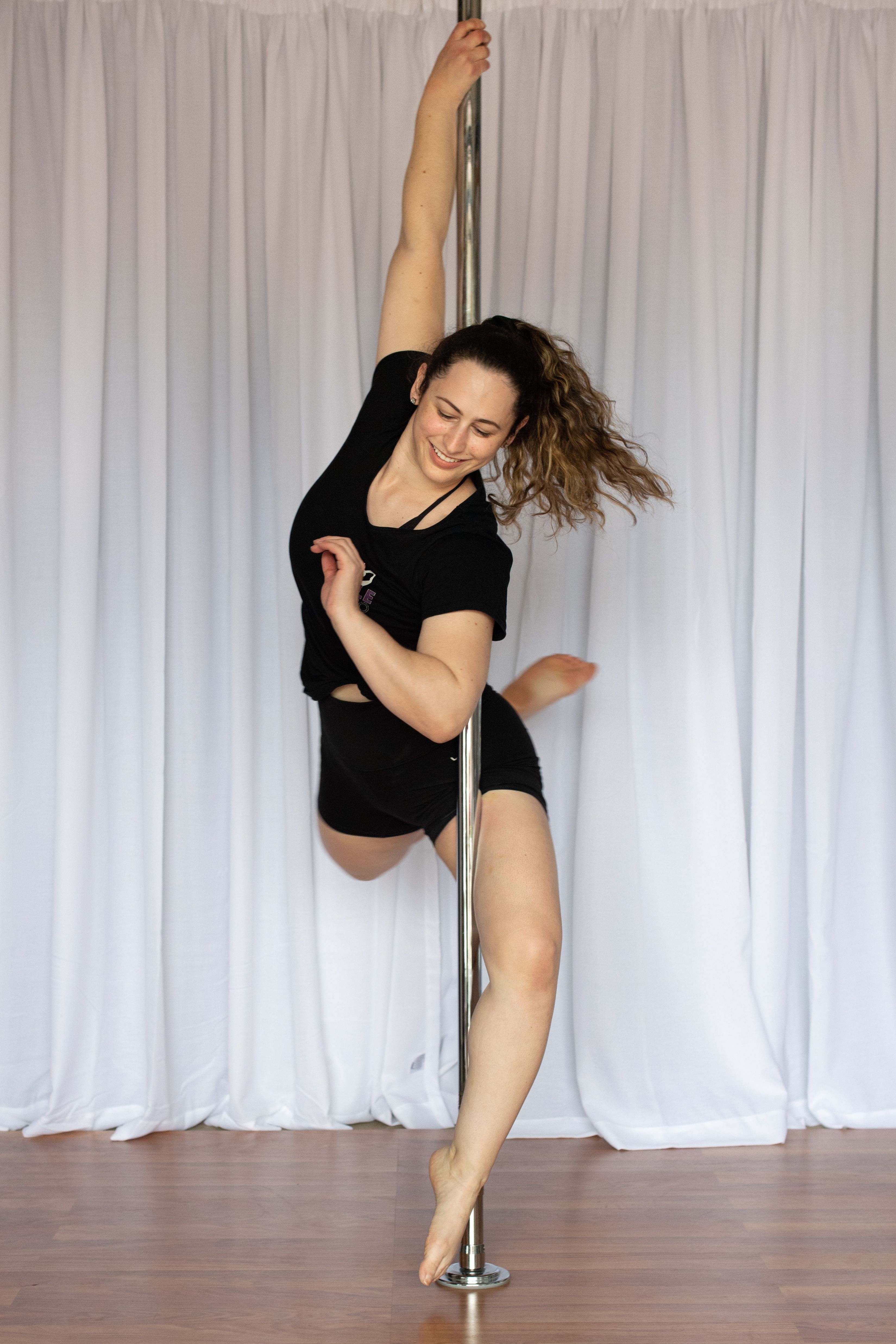 And if you’re sitting up late at night or on weekends doing your admin like Simone was, please know that there are easier ways to keep on top of things – we created Cliniko for precisely that reason! To see whether we’re a good fit for your clinic, check out our 30-day free trial.

No payment information required. Just create an account and get full access to every feature. When your 30 days are up, enter your payment details and continue enjoying all that Cliniko has to offer.